My husband and I are big fans of Asian cuisine.  But let me tell you what I am NOT a big fan of- ginger.  As a kid, my family frequented a local restaurant that served the most delicious Cantonese chow mein.  It was chock full of meats, veggies, and crunchy pan-fried noodles, doused in a rich brown sauce.  Mmm!  Unfortunately, the cooks at this restaurant were very fond of ginger.  And I'm not talking about finely diced ginger, either.  The dish was riddled with chunks of ginger root the size of your thumb.  Shudder.

The lovely brown sauce did a bang-up job of disguising the offending spice as, say, an innocent mushroom.  So eating the dish was kind of like playing a game of Minesweeper with your food- you had to clear the good stuff off your plate without accidentally chomping a ginger-bomb.  (Guess who always managed to find the bomb?  Yep- yours truly.) 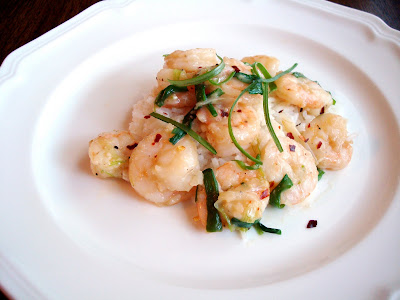 That brings me to tonight's entree.  Try as I might, I couldn't bring myself to buy the ingredient that caused me so much dinnertime strife as a kid.  But with an ingredient list so simple, I didn't want to leave the ginger out without replacing it with another flavor.  A splash of soy sauce fit the bill.  The resulting dish was light and really hit the spot.  The best part was that it only took 25 minutes from start to finish.  It would make a great after-work entree, although I would probably prepare the scallions the night before.

1.  In a medium bowl, whisk egg white, cornstarch, sugar, salt, and black pepper until a paste forms.  Add shrimp and toss to coat.  Set aside to marinate for 10 minutes.  Meanwhile, combine garlic, red pepper flakes, and soy sauce in a small bowl; set aside.

2.  Drain marinade from shrimp.  Coat bottom of a large skillet with oil.  Heat over medium-high until shimmering.  Add shrimp, along with the light green and white scallion pieces, and stir to coat with oil.  Cook, stirring and scraping up any brown bits from the bottom of the skillet, until the shrimp are almost cooked through, about 2 minutes.  Add garlic mixture and dark green scallion pieces.  Continue to cook until shrimp are cooked through, about one minute.

3.  Season to taste with salt and pepper.  Serve over steamed rice.