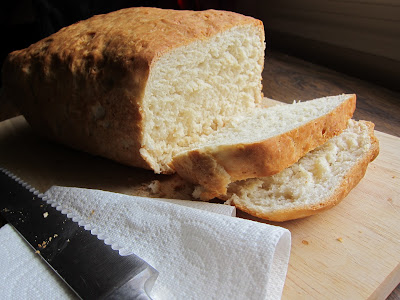 I've officially completed the first dish from my 28 by 28 list!  I threw together this sandwich bread over the weekend, and it yielded a loaf that was soft and moist on the inside with a crisp outer crust. It was so good that I willingly burnt my fingers trying to break off pieces of the heel to munch on.  Some reviewers recommended replacing half the water in this recipe with milk.  I plan to try that the next time around.  (And there definitely will be a next time around!)

And a tip:  In the past, I've made the mistake of killing my yeast by putting it in water that was too hot.  I've since begun using a digital thermometer to check the water temperature and have had no problems ever since.

1.  Combine warm water, yeast, honey, melted butter, and salt in the bowl of an electric mixer fitted with a paddle attachment.  While until yeast is dissolved.  Let stand until foamy, 5-10 minutes.


3.  On a lightly floured surface, knead dough, adding up to 1/2 cup more flour as needed.  Knead until smooth, elastic, and slightly sticky, about 4 minutes.


4.  Let rise in a large buttered bowl, covered with plastic wrap or a damp dish towel in a warm, draft-free spot until doubled in bulk, about 45 minutes.


6.  Punch down the dough and transfer to a lightly floured surface.  Gently knead until smooth.  Shape dough into a loaf, tucking sides underneath to form a seam down the middle.  Place the loaf in the buttered loaf pan.  Cover and allow to rise until dough reaches the top of the pan, about 15 to 20 minutes.