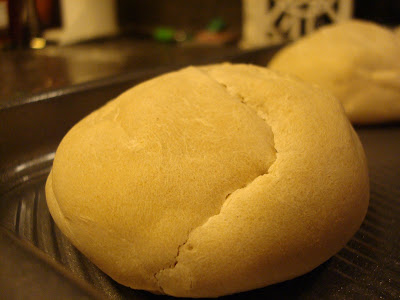 Boredom overtook me at about 11:00 tonight.  I figured I'd try my hand at baking bread for the first time. I heated the water, stirred in the honey, and added my super amazingly active insta-yeast. (You get the idea.) I was a pro! Precisely ten minutes later,I mixed in my flour, kneaded 'til the cows came home, and flopped that perfectly imperfect lump into a buttered bowl. Splendid.

An hour later, I could hardly wait to see my dough, doubled in size. "Double dough," if you will. I lifted the towel from atop the bowl in grandiose fashion... and saw that my "double dough" turned out to be a "double didn't". That's right. Staring back at me was that same teensy perfectly imperfect lump of the hour before.

Where had I gone wrong? I had measured, mixed, and kneaded my little heart out. A few minutes on the internet was all it took to learn where I had gone astray. It was in that first little step. You remember- the "I was a pro" step. It turns out the point of mixing all that water, honey, and yeast served a greater purpose than to showcase my killer whisking skills. It's called proofing the yeast. It's supposed to foam up to show you that the super amazingly active insta-yeast is still super amazingly active.

Oh, it had proofed all right. It had "proofed" to be about as flat as a half-empty can of Mountain Dew on a redneck's nightstand. I'll have you know that I baked that lump of dough anyway. It came out as dense as a hockey-puck. Ah, well. I'll have to try it again with fresh yeast. I will conquer you, sandwich bread!