I've got lots of good stuff to share with y'all in the coming days, but here's a little something to tide you over.  A couple of months ago, I bought a lovely little poblano plant at Lowe's.  It's now about four feet tall and has yet to produce a single pepper.  I walked outside this morning and saw that it's officially covered with blooms- wahoo!

But I also met this little guy. 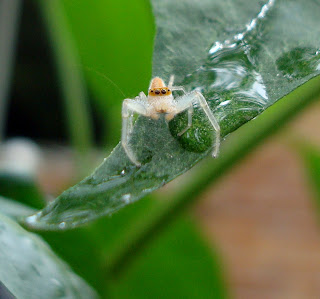 Now, if you knew me in real life, you'd know that I'm terrified of spiders, and pretty much any other creepy-crawly thing.  I'm talking scream-at-the-top-of-my-lungs-break-out-into-hives-and-burst-into-tears scared.  But this little guy was neat.  His body was translucent, and he was waving his front legs all around.  I decided to get a little closer so that I could take an awesome macro picture of his eyes.  Are you ready to see the shot? 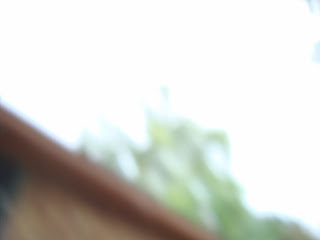 ..."Why Lauren," you might say, "those spider eyes look an awful lot like a tree and the roof of your house!"
Yeah.  That's because the little turd decided to JUMP ON ME.  I screamed like a little girl and ran into the house.  But there were no tears this time.
Okay, maybe just one.