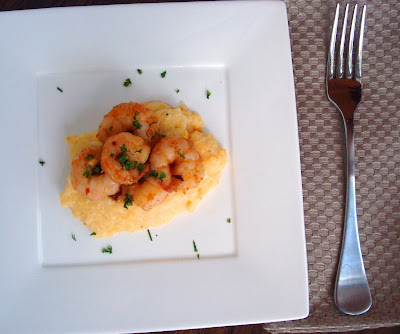 I tell you, I have been one busy lady lately.  I wrote eight essays last week, I've got seven due this week, and I'm taking my ESL certification exam on Saturday.  (Aaaah!)  I've been reaching for fix-it-fast favorites like pan-seared tilapia and Mongolian beef, but was longing to try something new.  Oishii came through again with this Shrimp Pil-Pil, more aptly described as Sizzling Hot Shrimp.

This dish was ready in a snap and went well over savory polenta.  It definitely had a kick to it, so it isn't for the faint of heart.  Next time, I plan to cook it in a nonstick skillet with only a tablespoon or two of oil so that I don't have to deal with any spattering.


DIRECTIONS
1.  In a large, heavy skillet, heat the olive oil over medium-high heat. Add the garlic, crushed red pepper, paprika, and chipotle and cook, stirring, for 30 seconds. Season the shrimp with salt and pepper, add to the skillet and cook until opaque, 1 to 2 minutes on each side. Remove from the heat and stir in the parsley.

2.  Transfer the shrimp mixture to a bowl and serve with the bread.